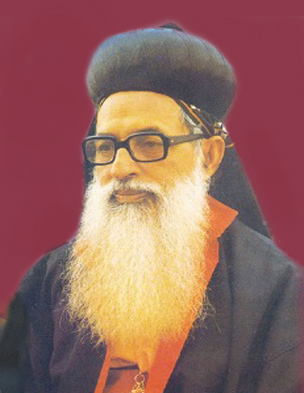 His Grace Most Rev. Benedict Mar Gregarious was the Archbishop of Trivandrum for more than four decades, heading the Malankara Syrian Catholic Church, till the day of his demise on 10th October 1994. He was a person loved and honored by all, irrespective of caste or creed. With his charisma and dynamism he involved himself in almost all the developmental activities of the State. He gave a new dimension to spirituality by recognizing the role of action in human life. His contribution to the fields of Education, Agriculture, Rural Development, Housing Economics and Culture has been very significant and acclaimed as commendable on the part of the Religious Head. He was Patron of the school for four decades

Born in 1916 at Kallooppara in Thiruvalla, T.E. Vargheese joined the Bethary Ashram, receiving the name Benedict, symbolic of the renunciation of his household life to embrace spiritual life in priesthood. He was ordained as a priest on 24 August 1944 and was introduced as the Bishop of Trivandrum on 29 January 1955. He was the president of Kerala Bishop's Conference and the Catholic Bishop Conference of India. He travelled extensively across the world. Besides the Education and Agriculture, he showed a keen interest in Labour, Industry, Housing, Social Services, Religious Harmony, Ecumenism, Environment Problem and Media. As an Economist he did a great deal as precept and practice to spread modern ideas from the common people.

He implemented a low cost housing scheme for the homeless. Under the ten point Health for a Million Programme' activities were organized under the following heads.

Education for Health and Development

Disease Control, Healing the Sick, Rehabilitation of the Disabled

Besides being a spiritual leader, he was an eloquent speaker, a linguist, an educationist and economist. He rightly interpreted the vision of the founder, Archbishop Mar Ivanios to the society and the Gospel of Love to millions.